Seeing an image of your unborn child on an ultrasound is such a magical time for any expectant parent.

But for Kelly Lewis she wasn’t just blown away by seeing her unborn baby girl’s face for the first time but by the image she saw next to her child.

The mom-of-one from Cardiff, Wales, spotted what looked like an angel watching over her baby in her ultrasound. The image was shared by British newspaper the Daily Mirror. 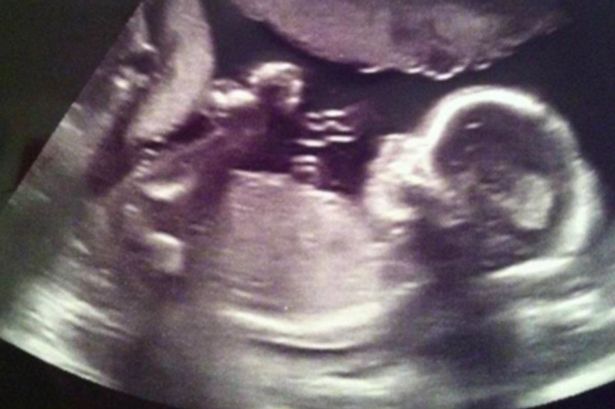 77 people are talking about this

She said her pregnancy had been “amazing” adding: “People said it looked like someone leaning over her keeping her safe. She is such a well-behaved little girl, it’s like she has been blessed.”

Kelly admitted that she didn’t spot the angelic presence until she showed the ultrasound to her friend.

“It was when I showed my friend later that day — he pointed it out to me. From then on, everyone has been fascinated with it,” Kelly told Today.

‘I am truly blessed’
She called her little girl, who is now six, Harper, meaning someone who plays the harp.

“She has a warmhearted, caring, and helpful personality — always polite and kind, and very sweet and innocent. She also has the sweetest smile — it’s very angelic. I am truly blessed to have her,” she added.

Did you see the angel in this ultrasound? Feel free to share your thoughts and comments on our Facebook page.

Related Topics:
Up Next

Coronavirus: Britons on Wuhan flights to be quarantined

Hundreds of British citizens being flown back to the UK from Wuhan on Thursday will be put in quarantine for two weeks on their arrival.It is believed passengers will be required to sign a contract agreeing to commit to the quarantine period.It comes as British Airways suspended all direct flights to and from mainland China because of the coronavirus outbreak.

Australia, Japan, the US and EU nations are also repatriating citizens.

The virus has caused more than 130 deaths, spreading across China and to at least 16 other countries.

The UK government plans to fly 200 British citizens out of Wuhan, the centre of the coronavirus outbreak.

He said the government would confirm their location in due course, but offered no comment on reports it would be a military base.

Health Secretary Matt Hancock is chairing a meeting of the government’s emergency Cobra committee on Wednesday evening.Under Chinese jurisdiction, only British passport holders who do not hold Chinese nationality are permitted to leave through assisted departure.

Natalie Francis, originally from York, said she had been told that she would have to leave her three-year-old son behind because he has a Chinese passport.

Ms Francis, who works as an English teacher in Wuhan, added: “I don’t know who can sort this out, [but] please don’t forget us.”

Ms Francis, who works as an English teacher in Wuhan, added: “I don’t know who can sort this out, [but] please don’t forget us.”